Organizations getting it right early

Stories from the field of organizations that are getting communication right during the pandemic.

Different organizations are taking very different approaches during COVID-19. Certainly, there is no play book for this event. Our team has been watching communication during this time and identifying examples of leadership. A few of our take-aways:

Take a look at a few organizations doing a great job with communications so far.

This is a great example of a local Spokane company who asked themselves “How can we help the community?” They started making hand sanitizer and giving it away for free, prioritizing front line workers. They got the word out via social media and mainstream media. And they killed it.

Consumer expectations have changed. We want to know that the brands we love are doing good things in the world. This type of COVID-19 response will create good will among Dry Fly’s customers (and the region) for years to come. They even got in some light marketing – but did it appropriately. We estimate that during their launch of “Spokanitizer”, Dry Fly Distilling’s social media posts have generated over 12,000 reactions, 3,000 shares and 1,300 comments. Our initial research reveals they’ve seen over 8.6 million impressions in traditional and digital media during this window. 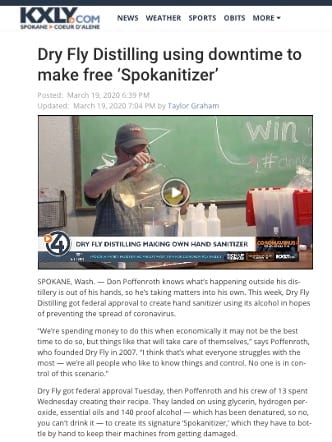 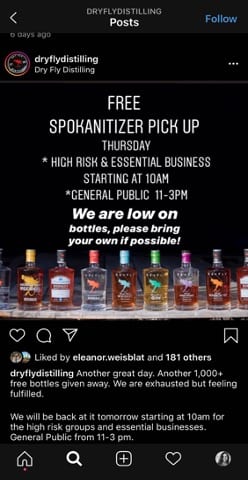 REI is an iconic northwest brand that also reacted quickly. REI closed stores on March 16 and has extended the closure citing their core values in a letter to customers: doing the right thing for the community. They are in a position to keep paying their employees. They were honest about the fact that this is difficult for their business, but that keeping each other safe was more important.

REI is communicating the company’s unique perspective, in support of its members, by providing ideas of how to spend time outdoors while still respecting social distancing. Their recent blog series covers everything from advice on hikes, scavenger hunts for kids, Zoom background photos, even building simple climbing walls. It’s a great example of how a brand can bring its unique voice to this moment in ways that are truly helpful to the community.

We’re proud to show you one of our clients that is thinking about their community first. Grant County PUD wanted to build a campaign to thank local residents who are working on the front lines of the crisis as everyday heroes to keep their community functioning. We just helped them launch a campaign that celebrates the people in their community. Videos in English and Spanish showcase the people are helping manage kids, providing health care and keeping the world running. The campaign will spotlight 10 different stories of local residents celebrating how they are working in the community.

Grant PUD is helping to promote a community resiliency fund and encourages people to donate or seek help from the fund. The energy provider is poised to emerge from the crisis reaffirming their commitment to the community and as a trusted partner to organizations and families across the region.

Ford Motor Company
Finally, take a look at one of the oldest and largest American companies.

Ford reacted quickly to the shifting economic and public health reality during coronavirus’ sweep across the nation. The company pulled its national advertising campaign ads promoting vehicles and replaced it with a new campaign describing how it is responding to the crisis, including giving Ford Credit customers payment relief. The new ads reference how the company built tanks and planes during wartime, and more recently offered payment relief to consumers affected by natural disasters like hurricanes, fires and tornados.

Ford is also ramping up its philanthropic efforts including giving money to support food programs for children no longer in school. It also is launching anemergency aid program with the United Negro College Fund aimed at helpingfinancially strapped students to get home following the sudden closures of colleges and universities.

Their CMO Matt VanDyke, director of U.S. marketing for Ford says they’ll be retooling campaigns to launch as soon as they feel it’s appropriate. He told AdWeek,“We’ll obviously look at it day-to-day and week-to-week. We’ve got some [vehicle] launches going on right now. Depending on how long this remains front-and-center in the news we’ll look at deferring out some of that activity into the next month.”

What you say. How you respond. It matters.